Notified in December 2014 by the Direction Générale de l’Armement (DGA), the PLG programme authorises the replacement of La Capricieuse and La Gracieuse, two 55-metre patrol boats of the P400 type commissioned in 1987. Specially designed for French Guiana, the PLGs utilise a Bureau Mauric design and were built by the Socarenam shipyard at Boulogne-sur-Mer.

With a length of 60 metres, a beam of 9.5 metres and a displacement of approximately 700 tonnes, La Confiante and La Résolue will have a draught of less than 3.2 metres, which will allow them to operate both on the open sea and in the shallow waters of the Guyana region.

With the objective of operating two intervention craft day and night, including in rough seas, the stabilisation of the vessels is a key point regarding the intervention capability of these vessels. The choice of GEPS Techno’s GEPS Techno’s SIRE passive stabilisation solution was based on an in-depth technical audit to guarantee the end client a high level of satisfaction. 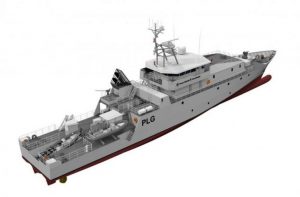